Extended Tuning LaserQC-ET Alpes Lasers offers two types of extended tuning devices, both of which allow rapid tuning at fixed temperature in a wider range than standard DFB lasers. The QC-ET (described here) allows fully continuous tuning over 0.4% of the central wavelength, while the QC-XT allows piece-wise continuous tuning over 2% of the central […] 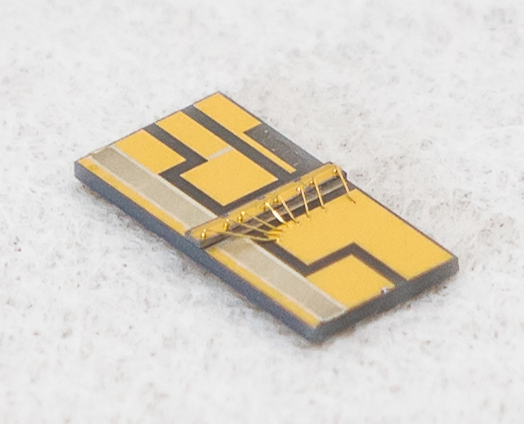 Packaging in TO3 housing

Packaging in TO3 housing Pulsed lasers are available in TO3 cans, which are smaller and less power-intensive than the HHL packages. TO3 cans are sealed and the beam is collimated. Size : 38.8 mm x 25.4 mm x 20.5 mm Small-size, low dissipation for OEM applications Pulsed lasers or low-dissipation CW laser with < 3 […]

RT-P-DFB-QCL Room Temperature Pulsed Single Mode Lasers In a Single Mode Laser, a grating is etched into the active region to force the operation of the laser at very specific wavelength determined by the grating periodicity. As a result, the laser emits on a single spectral setting which may be adjusted slightly by changing the […]

Shortwave Infrared DiodeRT-CW-SWIR Short Wave Infrared Laser Diodes are continuous wave, multiple longitudinal mode Fabry-Perot devices emitting light over a bandwidth of ~20 nm with output power up to 50 mW. They are offered either as chip-on-carrier or encapsulated in a low power TO-66 package with collimated or divergent free-space beam output.   Based on InP […]

High Peak Power LaserRT-HPP-FP-QCL Alpes Lasers introduces its new high peak power sources. Based on a unique gain-guided design, these Quantum Cascade Lasers are optimized for emitting short pulses from 20 ns to 1000 ns with minimum peak power of 20 W, or ~5 microjoules per pulse. Available on submount or in a HHL package […]

High Power LasersRT-HP-FP-QCL High Power Sources have a minimum average power of 1W and more than 9W of peak power. Available in a collimated HHL package with a dedicated driver, these lasers can be used for free-space optical communications, energy deposition, illumination and IR countermeasures. High Power lasers are currently available at the following central […]

Room Temperature Continuous Wave Frequency Comb LaserRT-CW-FC-QCL Frequency Comb Quantum Cascade Lasers are devices emitting light on a wide spectrum consisting of equidistant peaks in frequency space. The distance between these peaks being fixed, typically given by the pulse repetition rate of a train of ultrashort pulses, they can be used as rulers in the frequency […]